I
“The world will not be destroyed by those who do evil, but by those who watch them without doing anything.”
-- Albert Einstein


Targeted Justice is the world's leading information resource for Targeted Individuals.  If we have helped you, please consider a donation of $3.50 per month.  (That's less than your expensive cup of coffee.)      https://www.patreon.com/TargetedJustice
Preliminary Scheduling  -  We will post updates here for Targeted Protest 2020.  Please plan to join us.
Sept 22 - 25, 2020 - in Washington DC. 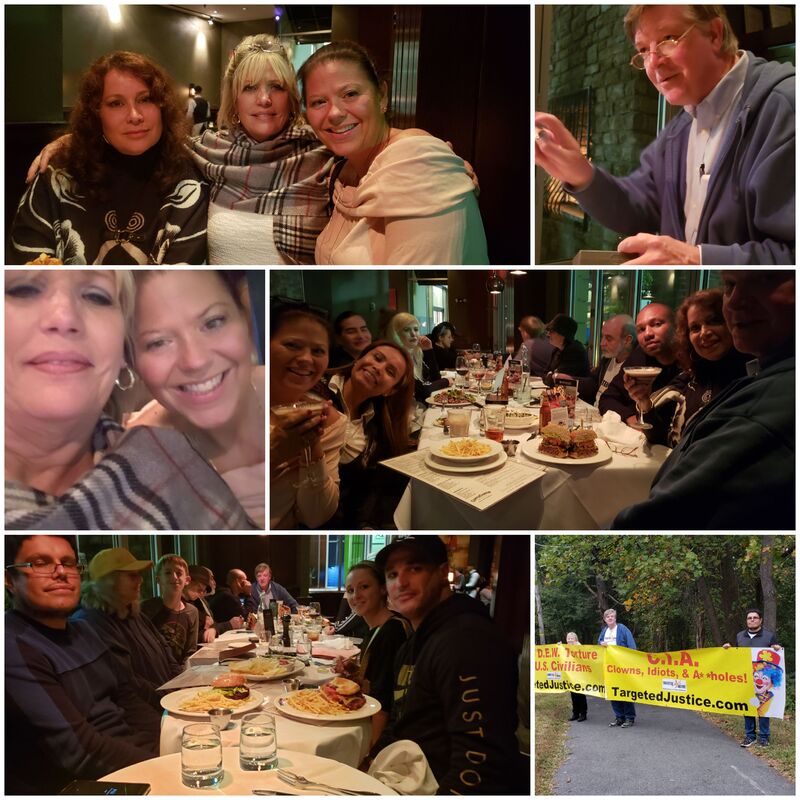 Silence is Complicity.
Speak out. Speak up.


Listen to our Board Members discuss the upcoming protest in Washington DC.  Many thanks to Frank & TargetedMassachusetts.org
https://youtu.be/u2nJpO0tHIg

Thanks for your support  and efforts that made this our best and largest demonstration.    We demonstrated at the White House Executive Office Building, the White House Ellipse, CIA Headquarters, the Director of National Intelligence, and Union Station.

Please join us for Targeted Protest 2020.


Sept 2020.  Washington D.C.
Targeted Justice is hosting a rally and protest event in our nation's capital.
Registration is $35 and includes a Free Tshirt.

We encourage you to request a 5 minute meeting with your Congressman.  You will need to make a request several weeks in advance.  Make the request thru your Congressman's website and ask for an appointment the week of Sept 22, 2020.
https://www.house.gov/representatives


This is the Senate Committee that knows about the corruption at Fusion Centers:
https://www.hsgac.senate.gov/subcommittees/investigations/


1.  REGISTER:  Please send us an email to confirm you are attending.  TargetedJusticeMembership@protonmail.com
Registration is $35 and includes a Free Tshirt.  See below.


By joining our event, you agree to accept full responsibility for your own actions and disruptions.
You agree to abide by the team's and the permit rules, and you agree to leave the area, if requested, by one of the leadership team.
Targeted Justice only seeks non-violent solutions for the Targeted Individual program.

You will need to make your own arrangements for hotel and travel.

5. Do's and Don'ts
All attendees must follow the rules, according to our city permit.  Permits are required for protests with 25 people or more.
Bring a rain pancho and a jacket.  Wear jeans to the rally.  Wear a coat & tie/nice dress to visit your Congressman.

Ideal travel is to fly in Sept 22 and fly out Saturday, 25th.  But we understand if you have other considerations.
Roundtrip flights on Spirit Airlines are currently $105, for Dallas to Baltimore.
and RT from Chicago to Baltimore is $77.

Reagan airport (DCA) has direct access to the metrorail.

Dulles airport (IAD) - you have to take a bus, go about 2 miles, then get on metro rail.

Baltimore airport (BWI) is generally the cheapest via Southwest.com, but you have to rent a car or take the bus to get into Washington DC.
Watch for baggage handling fees with the major airlines.

3-Day Unlimited Pass
The 3-day Unlimited Pass allows unlimited Metrorail and Metrobus travel with no time restrictions. The pass is activated the first time the card is tapped and expires at the end of the third consecutive operating day.

Expedia.com has hostels with dormitory-style rooms that are inexpensive.
Some are for women only.  About $30 - $50 per night.
Also check Priceline.com and Hotels.com

Preliminary event schedule:
More details will be provided as we schedule them.  Check back here for updates and last minute changes. 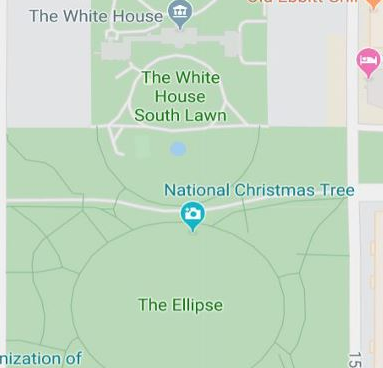 
Check back to this website for changes.   If light rain/drizzle, bring a rain poncho, we will continue.  If Heavy Rain - check here for information.

General Rules:
1)  Do not block traffic.
2)  Stay on the public sidewalk.
3)  Do not argue with anyone.  Smile and hand them a flyer.
4)  If police or intruders show up - start filming.

T-Shirts are included with the $35 registration.
You will be able to pick up your Tshirt at the rally or at the Tuesday night dinner.
Please specify  S, M, L, XL, 2XL  (they will shrink - 100% cotton) 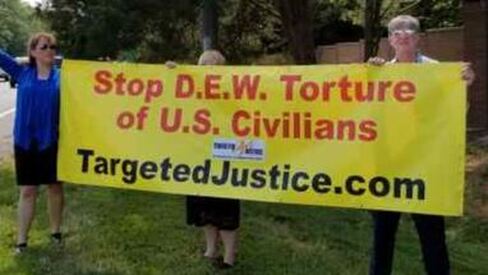 Targeted Justice at the
CIA Headquarters in Langley, Virginia
11.  Banners
You can make a large banner using a bedsheet (about $5 at Walmart) and acrylic paints or markers.     BlankBanners.com - inexpensive vinyl banners.
Professional banners can be made in a few days.  The one shown above cost $160 (10 feet X 3 feet).  It is waterproof vinyl and folds up into a suitcase.  You can design or draft a banner in OpenOffice or Word, and then export as a pdf file  -  forward the image to a discount printer.  Do an internet search for "discount banners."

Targeted Justice reserves the right to remove banners that are inappropriate or implore the use of violence.

Make your own smaller signs or visit Hobby Lobby when you get to Washington DC
More details will be announced as we schedule them.  Please bring 2 cameras.
Check back to this webpage.

Targeted Justice is a 501(c)(3) non-profit.  All proceeds will be used for the group's advocacy efforts.


We do not anticipate any problems with police or security, because we will be following all the rules.  We do know, however, that the FBI in prior events, has deliberately placed disruptive persons.  During the Cliven Bundy ordeal, Judge Navarro stated there was gross misconduct by the FBI, including planting moles inside the organization, and conducting fake documentaries.
https://www.nationalreview.com/2018/01/cliven-bundy-case-dismissed-judge-gloria-navarro-cites-flagrant-federal-misconduct-bureau-land-management/


"The very definition of a 'Deep State’ is when the very people, congressional leaders – people who are elected by the people – are not allowed to hear the intelligence reports."
--  Senator Rand Raul, Dec 2018


"I'm worried it's something deeper than that, I'm concerned that it's an effort on those who want a provocation with Russia or other countries to sort of push the president in the direction. So I don't think it's Trump vs. Obama, I think it's really the Deep State vs. the president, the duly elected president."
– Thomas Massie, U.S. Congressman


"The drive of the Rockefellers and their allies is to create a one-world government, combining super-capitalism and Communism under the same tent, all under their control ... Do I mean conspiracy?   Yes I do.   I am convinced there is such a plot, international in scope, generations old in planning, and incredibly evil in intent."
-- Congressman Larry McDonald, 1976


We've seen the Deep State. We've seen Democrats coming out of the Obama administration deeply politicized, who are fighting the President on every front.
--Senator Ted Cruz  (Hannity on the Fox News Channel, 5 September 2018)


The Deep State and the Left, and their vehicle, the Fake News Media, are going Crazy - & they don’t know what to do. The Economy is booming like never before, Jobs are at Historic Highs, soon TWO Supreme Court Justices & maybe Declassification to find Additional Corruption. Wow!
-- President Donald Trump (Twitter - 4:19 AM - 6 Sep 2018)


Look how things have turned around on the Criminal Deep State. They go after Phony Collusion with Russia, a made up Scam, and end up getting caught in a major SPY scandal the likes of which this country may never have seen before! What goes around, comes around!
-- President Donald Trump (3:54 AM - 23 May 2018)


"...we are living in a system which has conscripted vast human and material resources into the building of a tightly knit, highly efficient machine that combines military, diplomatic, intelligence, economic, scientific and political operations.  ...its preparations are concealed, not published.  Its mistakes are buried, not headlined. Its dissenters are silenced, not praised.  No expenditure is questioned, no rumor is printed, no secret is revealed.”
--President Kennedy, 27 April 1961.


“Behind the ostensible government sits enthroned an invisible government owing no allegiance and acknowledging no responsibility to the people. To destroy this invisible government, to befoul the unholy alliance between corrupt business and corrupt politics is the first task of the statesmanship of today.”
--President Theodore Roosevelt


"To me, this is simply a continuation of the takeover of the world by the shadow governments of the world and their relationships internationally. They’re always there, they don’t get voted in and out. They control all the information that gets fed to the president, for example, to make decisions. They can tailor what they want him him to do by focusing certain information to him and and keeping others away like shadow blocking. You don’t allow other opinions to get to him so that he doesn’t have the opportunity to see another view. They have most of the mainstream media under wraps and doing what they want them to do now, but it’s kind of like the nail in the coffin that says, ‘if you ever do something that exposes all the crimes we’re committing or any of the criminality that we’re doing behind the scenes, if you ever do that, we’ll get to you.’"
--- William Binney, Former NSA Technical Director, July 2019


“Being a whistleblower has never been an easy road to travel, but the difficulties they face now are greater than ever. As a cosponsor of the National Whistleblower Day resolution, I'm proud to celebrate those who bravely shed light on government abuse today and every day.”
-- Senator Ron Wyden, 2019


“The world will not be destroyed by those who do evil, but by those who watch them without doing anything.”
-- Albert Einstein

Killer Clowns from Outer Space (1988) - the true story of the CIA.
Don't miss this important documentary. 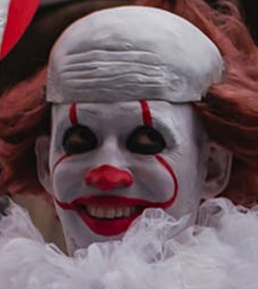