“...Fusion Centers have not produced useful intelligence to support federal counterterrorism efforts.  Instead, so-called “intelligence” shared between facilities consisted of tidbits of shoddy quality that was often outdated and “sometimes endangering citizen‘s civil liberties and Privacy Act protections.  More often than not, the information collected and shared at DHS Fusion Centers was unrelated to terrorism.”
--- Senate Permanent Subcommittee on Investigations


“It’s troubling that the very ‘Fusion Centers' that were designed to share information in a post-9/11 world, have become part of the problem.  Instead of strengthening our counterterrorism efforts, they have too often wasted money and stepped on Americans’ civil liberties.”
---  Senator Tom Coburn (R-OK)


"The right of the People to be secure in their persons, houses, papers and effects, against unreasonable searches and seizures, shall not be violated…."
~ From the Sixth Article, U.S. Bill of Rights, Ratified: December 15, 1791, Fourth Amendment

Targeted Justice is the world's leading information resource for Targeted Individuals.  If we have helped you, please consider a donation of $3.50 per month.  (That's less than your expensive cup of coffee.)      https://www.patreon.com/TargetedJustice 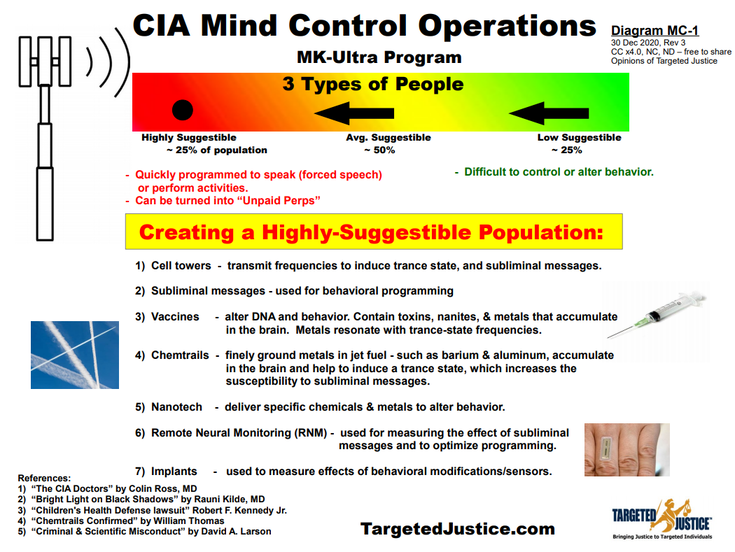 Pull down the TAB under   GANGSTALKING - CITIES   - and you will see links to New York City, Los Angeles, Houston, London, Mumbai, etc.

The subculture of Gangstalking (2013)
https://www.newstatesman.com/2013/05/ruins-peoples-lives

The term “Gangstalking” or "Organized Stalking" refers to intense, long-term, harassment, intimidation, and surveillance of a Targeted Individual.  These covert operations are run by the Deep State Fusion Centers in each state, and many police departments are involved, worldwide.  It is funded by the CIA under the black budget, with the intention to silence or neutralize a  person, who is often a whistleblower or political activist.  Such operations have little to do with criminal gangs, as they are operated by official government-funded agents.  Private organizations, such as Infragard, Citizen Corps,  and Neighborhood Watch are often involved.  The database of targeted names is held in the FBI's Terrorist Screening Center - called the "Watchlist."  The Watchlist now holds approximately 1.5 million names, worldwide.  Federal Judge, Anthony Trenga, ruled that the Watchlist is Unconstitutional, because the FBI could not provide any evidence that the names were "known or suspected terrorists."

TI's are encouraged to email, call, or contact these people, using a Cease & Desist Letter.  Please do not threaten or harass anyone - Targeted Justice only seeks non-violent solutions.

The FBI supports Infragard by providing the eGuardian computer network.  This is a separate network that allows the FBI to communicate with Fusion Centers and Infragard, and conspire against Targeted Individuals.  Federal Conspiracy charges are very serious and carry heavy prison sentences.

Targeted Justice represents patriotic Americans and innocent civilians.  We are certainly not terrorists.  Like many famous Americans, including Dr Ron Paul, Senator Rand Paul, and President Trump  -  we are opposed to the Deep State, not the American Government.
See the book, "The American Deep State" by Dr Peter Dale Scott, Professor at UC Berkeley.
Former CIA Director, John McLaughlin, admits the Deep State is real.  No longer a "conspiracy theory" - it is conspiracy fact.   https://www.realclearpolitics.com/video/2019/11/01/former_acting_cia_director_john_mclaughlin_on_impeachment_thank_god_for_the_deep_state.html


Gangstalking is also connected to the Martial Law plan signed by President GW Bush in 2007.  Grossly illegal and Unconstitutional.  State and County officials with the Office of Emergency Management are involved in the gangstalking, as well as, planning for Martial Law.  Citizen Corps is a known TERRORIST ORGANIZATION, that is funded and controlled by DHS.

Deep State Planning for Treason.   This diagram shows how Directive 51 is related to the gangstalking.  Presidential Directive 51 "claims" that the President can declare Martial Law in the United States, which is Unconstitutional.  This includes an "Emergency Detention Program," where FEMA plans to round up and imprison anyone opposing the takeover.  There are more than 900 FEMA prison camps in the United States.   City Mayors are told to sign a "Delegation of Authority" which gives control of a city to FEMA designated people.  The World Affairs Council (WAC), a subsidiary of the Council on Foreign Relations (CFR), plans to take control of the local governments (because FEMA will designate them).  WAC conspirators have held training exercises, where they simulate taking control of the Mayor’s office and City Council.  The WAC office in Houston, is in the same building as the FBI.  Coincidence?

FEMA is organized into 10 Regional Administrators that will control the 50 states, and we call these seditious criminals - the Linebackers of Treason.  FEMA calls it “Continuity” planning or Resilience planning - it is a plan for Treason.
For more details:
https://www.rlighthouse.com/store/p89/Presidential_Directive_51_%26_FEMA_Prison_Camps.html

To find the criminal government agents involved in your city and state - simply search for "Counterterrorism."

The gangstalking is almost always run as a covert operation, hidden under the guise of "Counterterrorism."  TargetedJustice.com has produced the first list, worldwide, showing actual names for these criminal government agents.

Employees at the Fusion Center are instructed that the covert operation is targeting "known or suspected terrorists," such that the employees feel justified in the illegal and unconstitutional harassment.  Agents of communist East Germany’s Stasi (state police) refer to the process as "Zersetzung" (German for “decomposition” or “corrosion”).  American and British victims have described the process as “no-touch torture” – difficult to prove legally, because it generates minimal forensic evidence.  Psychological Torture is a War Crime, under Article 32 of the Geneva Conventions, and it is punishable by the Death Penalty.

These operations clearly violate the U.S. Constitution’s Fourth Amendment, which prohibits unwarranted searches, and the Sixth Amendment – which guarantees the right to a trial.  Stalking is also specifically prohibited by the criminal codes of every state in America.

In December 2019, Federal Judge Anthony Trenga, ruled that the Watchlist was Unconstitutional because the Dept of Justice (DOJ) and FBI failed to show any shred of evidence, that the listed names were "known or suspected terrorists."  Deep State Attorney General, William Barr, has announced the Dept of Justice will start a "New Watchlist," that will now accuse these same people of being potential "Mass Shooters."  The names from the old Watchlist will simply be transferred to the new Watchlist.  This is clearly an attempt to continue the illegal program under a different name.  William Barr is a former CIA agent, and probably still reports to the CIA.  Today, Mr Barr lives within walking distance to the front gates, of CIA Headquarters in McLean, Virginia.  Coincidence?


Infragard.org is a national gangstalking and TERRORIST ORGANIZATION.  They are setup and controlled by the FBI.  After they are established, they solicit donations from companies.  The FBI assigns an agent to each of the Infragard offices, and they have 66,000 members in the United States.  This represents roughly half, of the daily gangstalkers in the United States.  Citizen Corps (DHS) and Neighborhood Watch also have significant member-stalkers.  See their websites.
https://www.ready.gov/citizen-corps
https://www.nnw.org/

The paranoid idiots & patsies at Infragard, believe that a terrorist is hiding behind every tree, and under every rock.  The FBI cultivates this type of paranoid thinking, because it justifies a bigger budget every year.  And it allows the FBI to avoid FOIA requests about the activity.  Infragard has been duped into performing criminal acts for the FBI.

Their supposed goal is to protect infrastructure.  But you can't accomplish "protection" by having meetings and talking about protection.  You have to surveil someone - and that's grossly illegal.  There are stalking laws in every state.  Where do they get the names from? - The FBI and the Fusion Center provide them with names and addresses from the FBI's fraudulent Watchlist.  However, Judge Anthony Trenga declared the Watchlist as Unconstitutional, because the FBI could not provide a shred of evidence, that someone was a "known or suspected terrorist."  This is how the patsies at Infragard are duped into performing the dirty work for the FBI.

The Watchlist is not a list of terrorists.  Most of the names on it are "Non-Investigative Subjects" (NIS).  We can deduce that the FBI is a criminal organization, just like former agents, Ted Gunderson and Geral Sosbee (http://sosbeeVFBI.com/ ) have repeatedly stated.  Former FBI agent Geral Sosbee has provided a sworn affidavit, confirming that the Targeted Individual program is real.


Citizen Corps is a group organized and controlled by the DHS.   From the Senate’s Permanent Subcommittee on Investigations  -

The Department of Homeland Security’s work with state and local Fusion Centers, the subcommittee writes, “has not produced useful intelligence to support federal counterterrorism efforts.” Instead, so-called “intelligence” shared between facilities consisted of tidbits of shoddy quality that was often outdated and “sometimes endangering [to] citizen‘s civil liberties and Privacy Act protections.”  “More often than not,” the panel adds, information collected and shared at DHS Fusion Centers was “unrelated to terrorism.”  In another instance, surveillance is thought to have been conducted on regular civilians not reasonably suspected of any crime, despite a 2008 memo sent to the DHS warning, “You are prohibited from collecting or maintaining information on US persons solely for the purpose of monitoring activities protected by the US Constitution, such as the First Amendment protected freedoms of religion, speech, press, and peaceful assembly and protest.”

"...the Senate subcommittee says they found 574 unclassified draft reports filed by field officers at Fusion Centers, documenting suspected terrorist activity, though only 386 of those reports were ever published and only a fraction showed any link to terrorism... The panel includes several examples of costly and time-consuming investigations undertaken by fusion centers employees, all which emphasize what appear to be the DHS’ relentless attempts to enter anyone and everyone into a system of suspicious persons."  https://www.rt.com/usa/intelligence-fusion-dhs-report-598/

The Senate subcommittee estimates that as much as $1.4 billion, by 2011 — has been invested by the DHS into the Fusion Center program.

The Office of Emergency Management (OEM) appears to be directly involved in many Gangstalking operations.  This seems to be a global structure.


It is my opinion, that you and your organization are involved in a serious crime, called gangstalking.  I have compelling reasons and evidence that you are attacking civilians with psychological torture techniques, including stalking, gangstalking, harassment, and intimidation.

I am part of a larger group representing the interests of more than 2,500 Targeted Individuals ("Non-Investigative Subjects").  We demand an explanation for these activities and compensation for pain, suffering, and illegal torture.  A similar letter has been sent to General John Raymond at the Air Force Space Command, where he is involved with illegal satellite tracking and microwave weapons.

You can be sued in a Civil Court for your criminal activity.

I demand that you immediately CEASE AND DESIST your illegal activities, including the use of government personnel and external groups, such as Infragard and Citizen Corps, which may also be participating.  Such operations are in violation of Article 32 of the Geneva Conventions (psychological torture) and numerous Federal & State laws.

This CEASE AND DESIST ORDER demands that you immediately discontinue and do not at any point in the future, under any circumstances, do the following: pursue, harass, attack, strike, bump into, brush up against, push, tap, grab, hold, threaten, telephone (via cellular or landline), instant message, page, fax, email, follow, stalk, shadow, disturb the peace, keep under surveillance, hack electronic devices, gather information about and/or block movements at home, work, social gatherings, in public areas, or religious functions.

You may have already violated numerous Federal & State laws, including:

Should you choose to continue your current activities, I will not hesitate to file complaints and publicly expose your ongoing criminal activity.

This letter does not constitute an exhaustive statement of my position, nor is it a waiver of any rights or remedies in this or any other related matter.  I insist on your immediate compliance, and expect a written response within two weeks.


CONTENT ON THIS WEBSITE IS THE OPINIONS OF TARGETED JUSTICE AND/OR RICHARD LIGHTHOUSE.  OPINIONS ARE A PROTECTED FORM OF SPEECH.