Targeted Justice is the world's leading information resource for Targeted Individuals.  If we have helped you, please consider a donation of $3.50 per month.  (That's less than your expensive cup of coffee.)      https://www.patreon.com/TargetedJustice

Please print out a copy of this Tab, in case our web site is taken down. 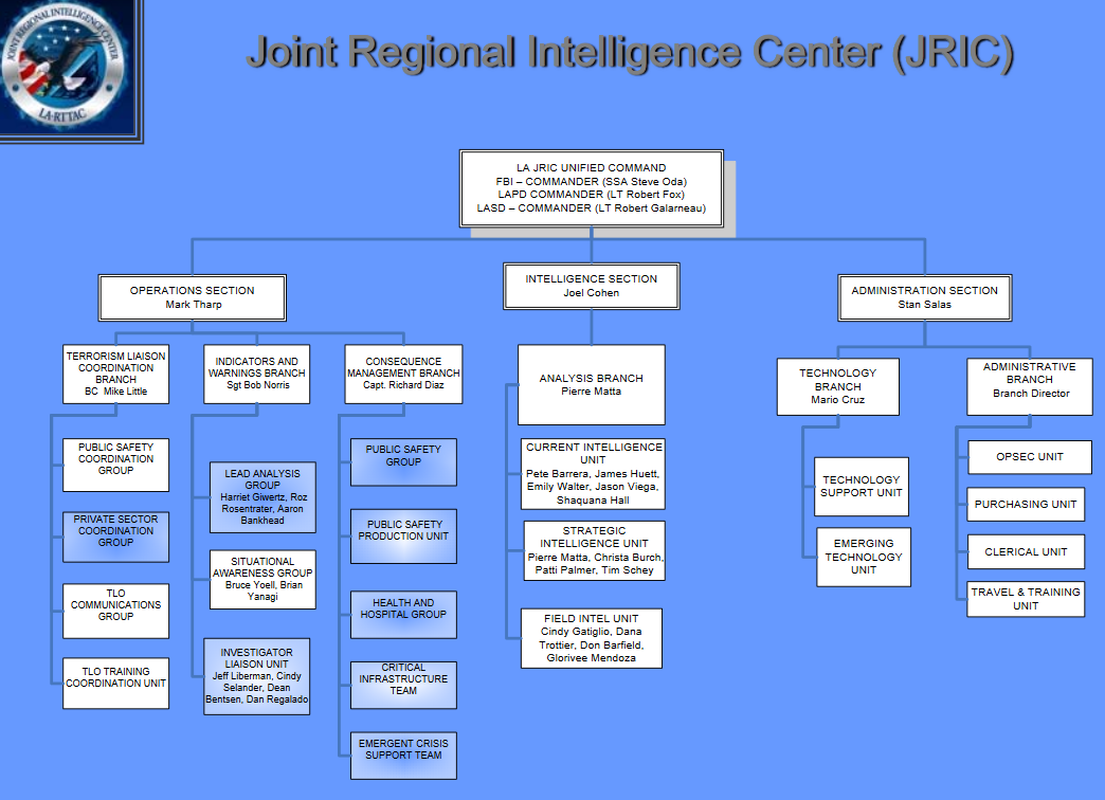 The Director of the Fusion Center in each state, is the criminal Boss for these operations.  You might think of these people as a "mafia boss."

In my opinion, the people on this chart have led the Gangstalking Program for greater Los Angeles, for many years.  The federal government calls it a Fusion Center.

Federal Judge Anthony Trenga, decided that the Watchlist is Unconstitutional, because the FBI failed to provide any shred of evidence, that someone was a "known or suspected terrorist."

Targeted Individuals are not terrorists.  They are gangstalked because they are whistleblowers and political activists, etc.  The CIA wants them silenced, and funds this program through the black budget.

Alejandro Vargas, Jr and Cynthia Gatiglio have held management positions at the JRIC.
In my opinion, they both know about, and support the Gangstalking operations.  It is illegal.

In the opinion of Richard Lighthouse,

At the Los Angeles Police Dept, these two Assistant Chiefs are involved with Gangstalking Operations and the cover-up.

JRIC states that Infragard plays a important role in their operations.  However, Infragard is little more than a privatized spying and stalking organization, in my opinion.  This is done to avoid FOIA requests.  Their people are recruited, trained, and tasked using the FBI's "Confidential Human Sources Policy."

Infragard.org is a national organization.  They are funded and controlled by the FBI.  After they are established, they solicit donations from companies.  The FBI assigns an agent to each of the Infragard offices.  They have 66,000 members in the United States.  This represents about half of the daily gangstalkers in the United States.  Citizen Corps (DHS) and Neighborhood Watch also have significant member-stalkers.  See their websites.
https://www.ready.gov/citizen-corpshttps:/
/www.nnw.org/

The paranoid idiots at Infragard, believe that a terrorist is hiding behind every tree, and under every rock.  The FBI cultivates this type of paranoid thinking, because it justifies a bigger budget every year.  And it allows the FBI to avoid FOIA requests about the activity.

Their supposed goal is to protect infrastructure.  But you can't accomplish "protection" by having meetings and talking about protection.  You have to surveil someone - and that's grossly illegal.  There are stalking laws in every state.  Where do they get the names from? - The FBI and the Fusion Center give them names and addresses from the FBI's illegal Watchlist.  Judge Anthony Trenga declared the Watchlist as Unconstitutional, because the FBI could not provide a shred of evidence, that someone was a "known or suspected terrorist."  This is how the patsies at Infragard are duped into performing the dirty work for the FBI.