Raytheon KTech is working on the next generation of microwave weapons (CHAMP).  Basically, it fires a microwave beam, just like a Vircator, but operates at a much higher frequency to make it difficult to detect.  Also, Raytheon is upgrading the Operational Control System software used by the ground station operators at Schriever AFB - this is the system that controls all of the GPS satellites that track and attack Targeted Individuals.


This company can no longer claim that they did not know about the attacks on Targeted Individuals, and they are subject to being sued.


“Behind the ostensible government sits enthroned an invisible government owing no allegiance and acknowledging no responsibility to the people.”
--  President Theodore Roosevelt

After significant research, TargetedJustice.com has determined that the Raytheon Corporation is involved in the Targeted Individual Program, which includes using Directed Energy Weapons to track and attack United States civilians.  These actions are clearly defined as Treason or Misprision of Treason.  In particular, your Intelligence, Information and Services division is writing the ground control software for the GPS satellites, which are designed to illegally track millions of civilians, worldwide.  Your employees were aware of this from the classified design specifications.

Further, your Raytheon KTech division in Albuquerque, New Mexico, is building microwave beam weapons for the Air Force.  We believe these weapons (CHAMP) can be used illegally against civilians.  Your employee, Donald J. Sullivan, was involved with the development of the original Vircator microwave weapons (US patent 4345220), which have been used against U.S. civilians.

The undersigned represent the interests of more than 2,000 Targeted Individuals ("Non-Investigative Subjects").  We demand an explanation for these activities and compensation for pain, suffering, and illegal torture.  A similar letter has been sent to the Air Force Space Command in Colorado Springs.

We demand that you immediately CEASE AND DESIST your illegal activities, including the support of military personnel using these tracking systems, providing training or technical support, or providing upgrades or modifications to the systems which are being used to track or attack civilians.  Such actions are in violation of Article 32 of the Geneva Conventions and numerous Federal & State laws.  In the United States, your continued actions constitute High Treason.

You may have already violated numerous Federal laws, including:

This letter does not constitute an exhaustive statement of our position, nor is it a waiver of any rights or remedies in this or any other related matter.   We insist on your immediate compliance, and expect a written response within two weeks.

Finally, SEC Rule 10b-5 requires the FULL DISCLOSURE of information that might effect the price of L3Harris shares.  We expect you to FULLY DISCLOSE to your shareholders that there is a risk your company will be sued for billions of dollars.

It should be noted that the United Nation Human Rights Council has previously declared that aiding and abetting a war crime – by selling weapons a nation knows will be used in the commission of atrocities – is also a war crime.  And under

This means that Raytheon and its senior executives have committed War Crimes and Treason against U.S. Civilians, by continuing to assist the USAF.


Obtained under fair use.  Raytheon admits they are installing these upgrades at Schriever AFB: 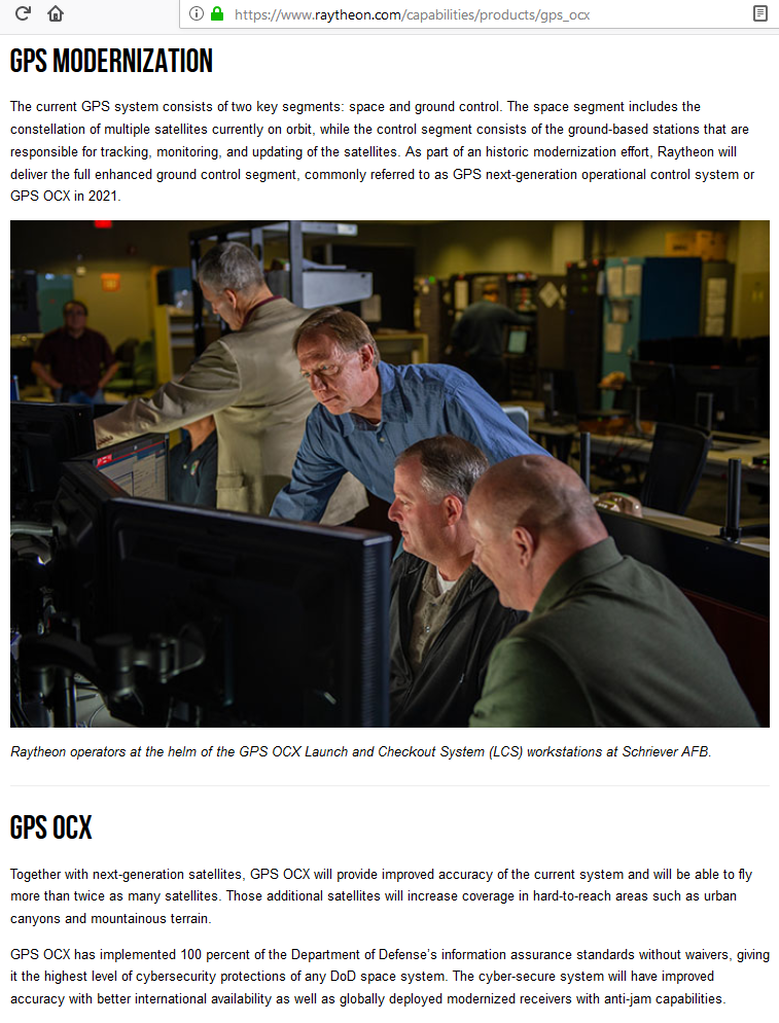 ALBUQUERQUE, N.M., March 23, 2016 /PRNewswire/ -- The U.S Air Force has awarded Raytheon Company (NYSE: RTN) $4.8 million to continue the Counter-Electronics High Power Microwave Advanced Missile, known as CHAMP, aboard the Conventional Air-Launched Cruise Missile
CHAMP is a non-kinetic payload that can disable adversaries' electronic systems. As part of the contract, Raytheon Missile Systems Ktech will refurbish the CHAMP payload and a pair of CALCMs and deliver them to the Air Force Research Laboratory. This is the first major CHAMP activity since the AFRL successfully demonstrated the technology in October 2012.
"Non-kinetic systems give the U.S. the option to defeat enemy infrastructure with little collateral damage," said Dr. Thomas Bussing, vice president of Raytheon Advanced Missile Systems. "The pairing of CHAMP and CALCM, a proven weapon, lowers risk and brings tomorrow's capabilities forward to today."
The CHAMP industry team includes CALCM manufacturer The Boeing Company and Sandia National Laboratories.
About CHAMP About Raytheon
Raytheon Company, with 2015 sales of $23 billion and 61,000 employees, is a technology and innovation leader specializing in defense, civil government and cybersecurity solutions. With a history of innovation spanning 94 years, Raytheon provides state-of-the-art electronics, mission systems integration, C5I™ products and services, sensing, effects, and mission support for customers in more than 80 countries. Raytheon is headquartered in Waltham, Mass. Visit us at www.raytheon.com and follow us on Twitter @Raytheon.
Media Contact
Lorenzo R Cortes
+1.520.794.2920
[email protected]
SOURCE Raytheon Company

Opinions of Richard Lighthouse:  The CHAMP system is a microwave beam weapon, similar to the Vircator, but it operates at much higher frequencies.  This helps to prevent its detection, while using a signal analyzer.   You will still be able to feel the microwave pulse with your hand.  If the CHAMP system can destroy the electronics in a computer system or missile, then it can also be aimed at a person and cause excruciating pain. 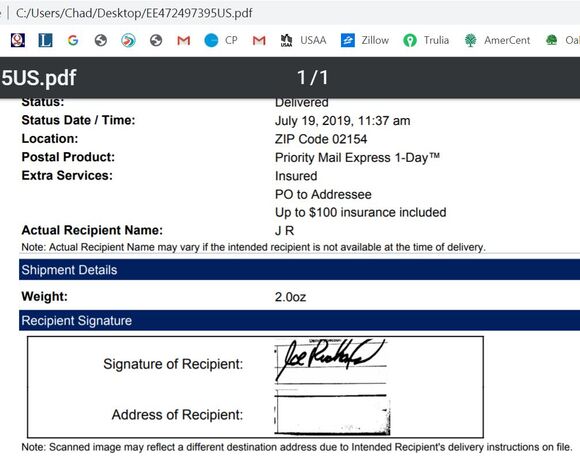 Proof from the US Postal Service - it was delivered.  Joe Rushad?
Raytheon - next shareholder meeting is May, 2020 in Waltham, Mass.  Plan to be there.


EXECUTIVES:   LAST KNOWN ADDRESS & RELATIVES
from Zabasearch.com  and Veripages.com  -  this is public information.